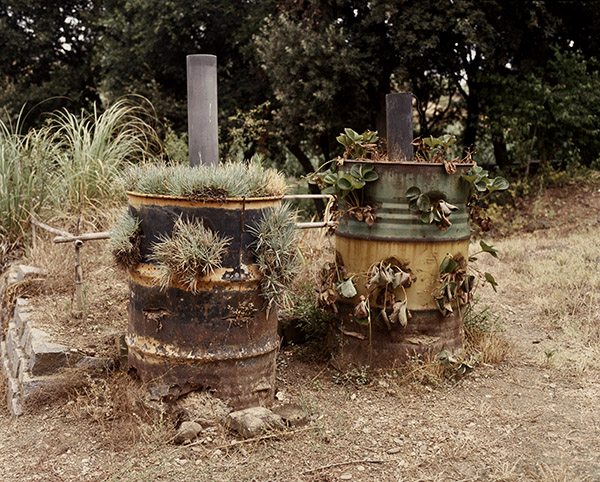 I grew up in an agricultural area on the city outskirts, which gradually became more impermeable and urban over time. Thirty years later I started poking around among the traces of people who, for different reasons, had decided to change sands by asphalt.

Most of these people had moved from rural areas to major urban centres in order to contribute to the construction and transformation of new territories. They actively participated in changing the landscape and the imaginary bound up in the identity of their children. Over time, some of these people began to return to leftover permeable lands near their new cities, creating new “agro-peripheral” areas. These places are simultaneously the memory, representation and transposition of a notion of landscape that they have been carrying with them for many years.

“Agroperifèrics” is the first book in a two-part project that begins with a journey through these constructed paradises. 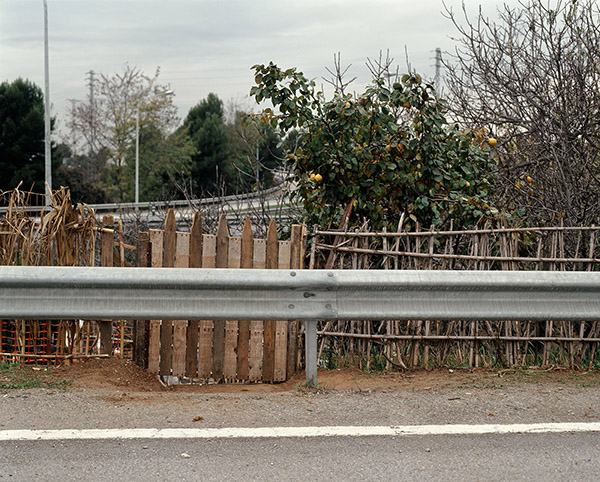 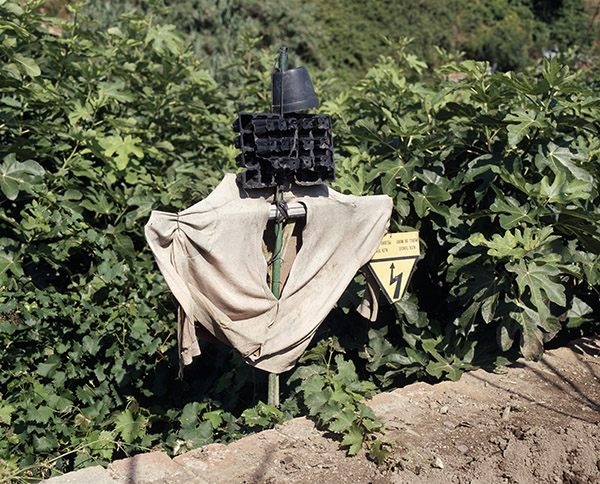 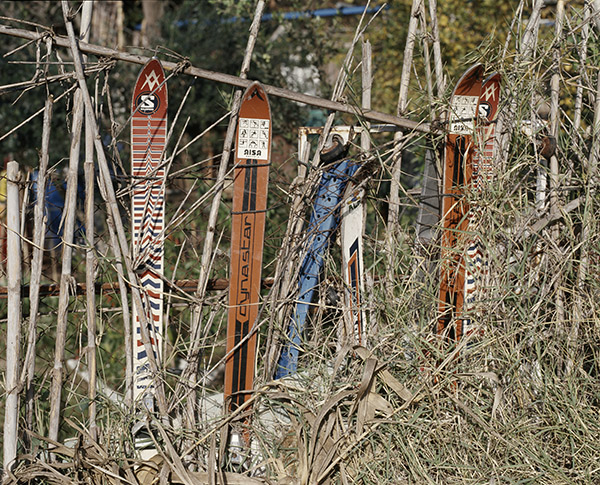 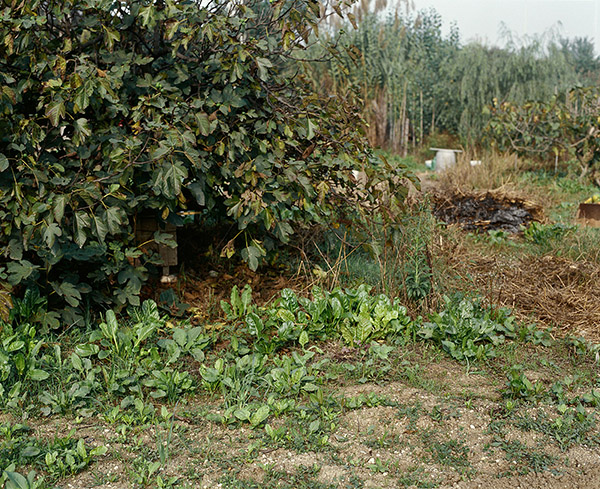 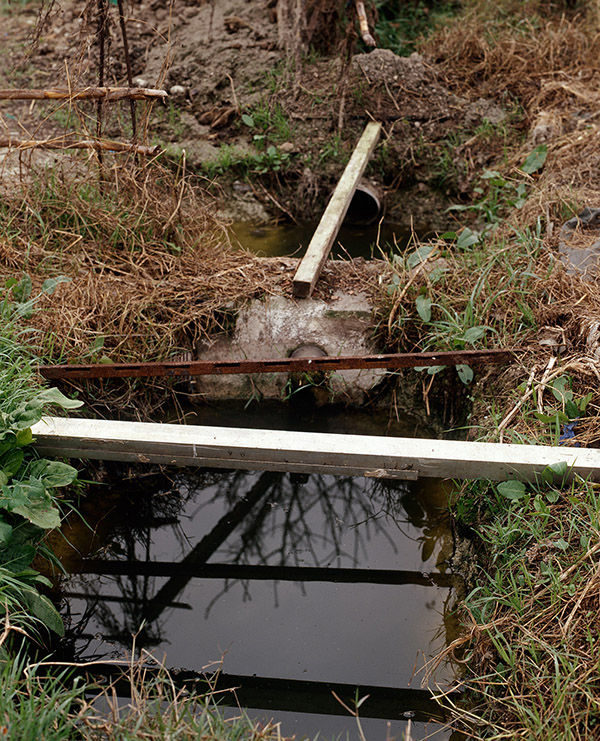 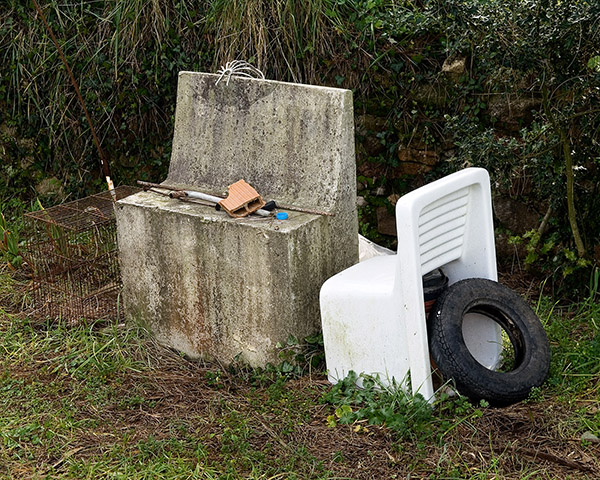 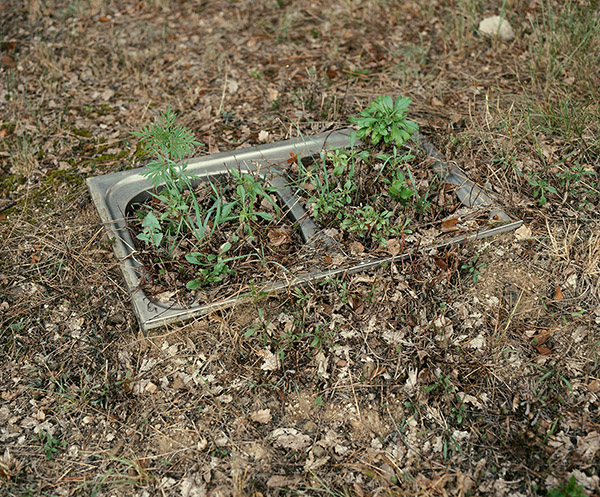 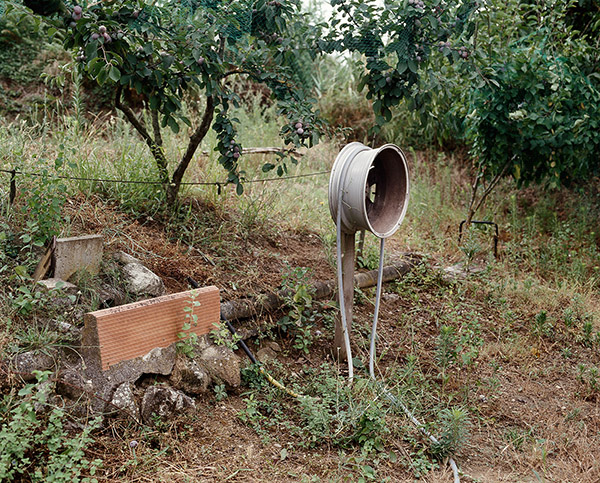 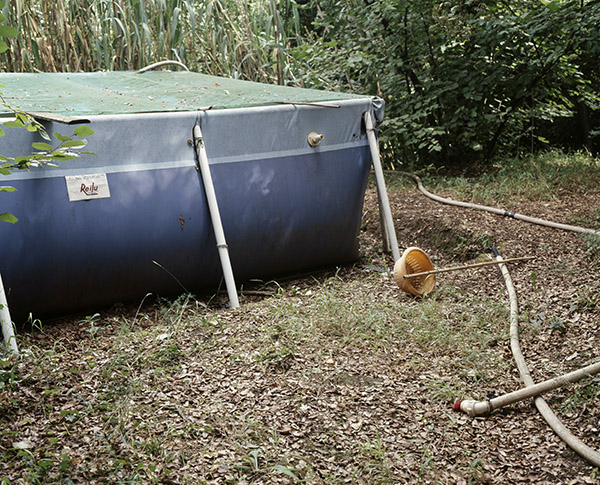 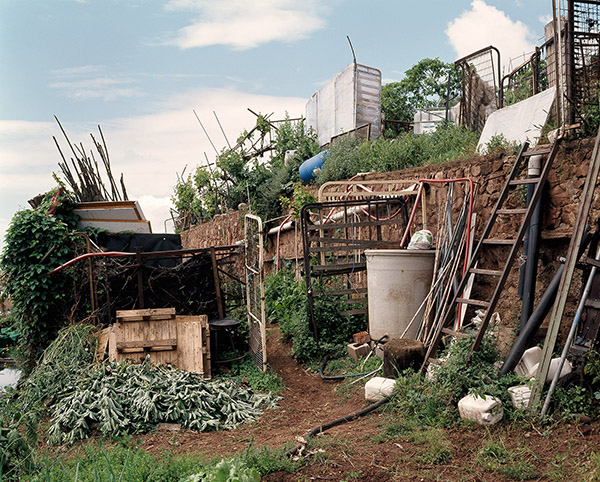 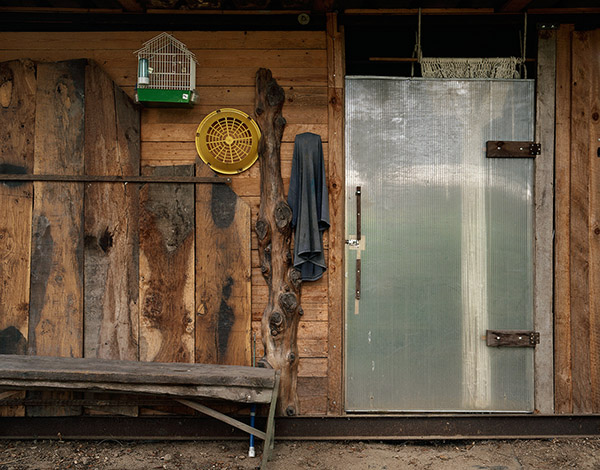 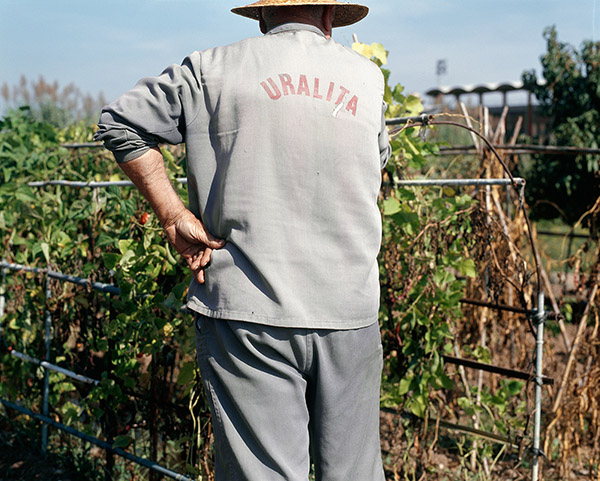 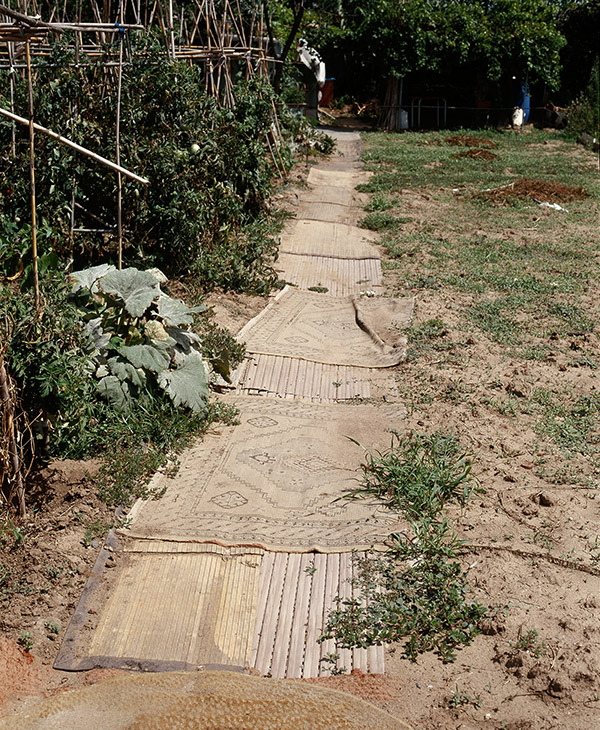 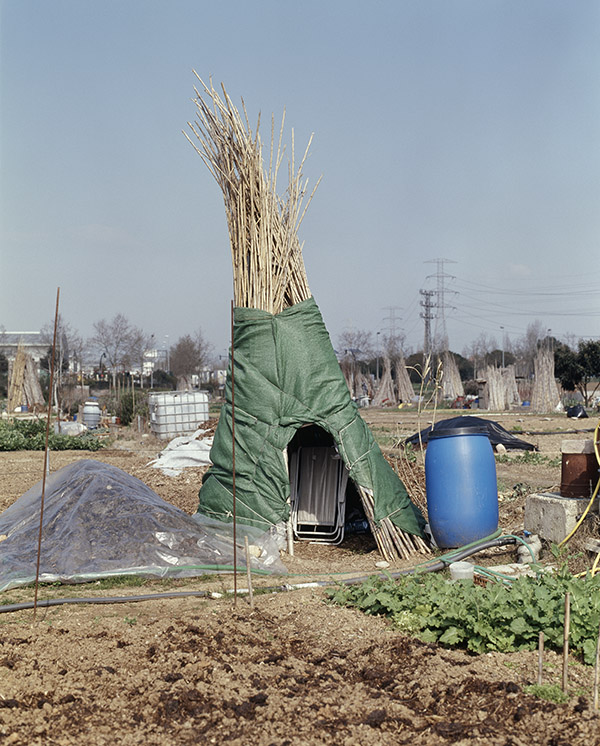 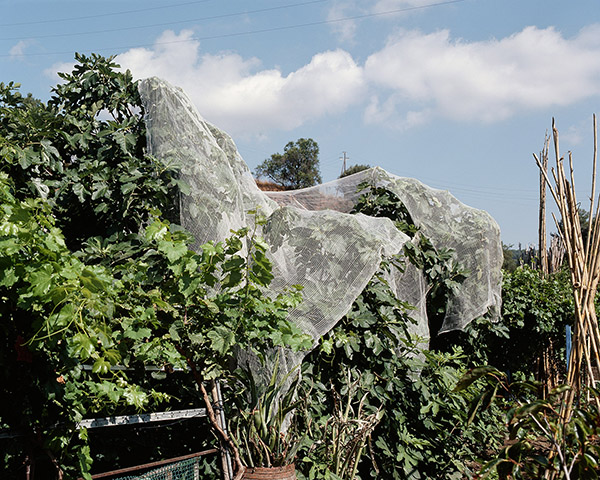 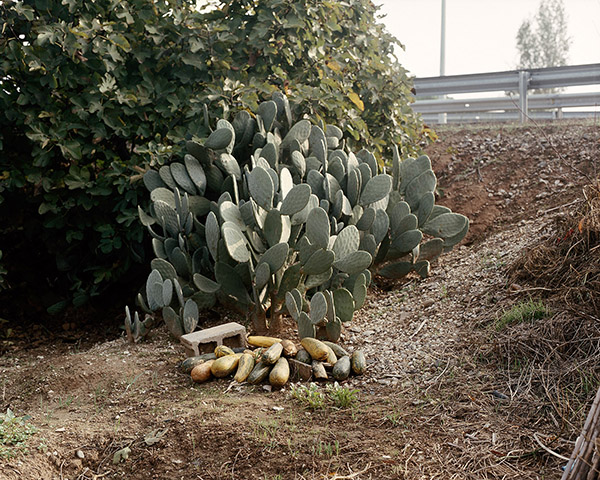 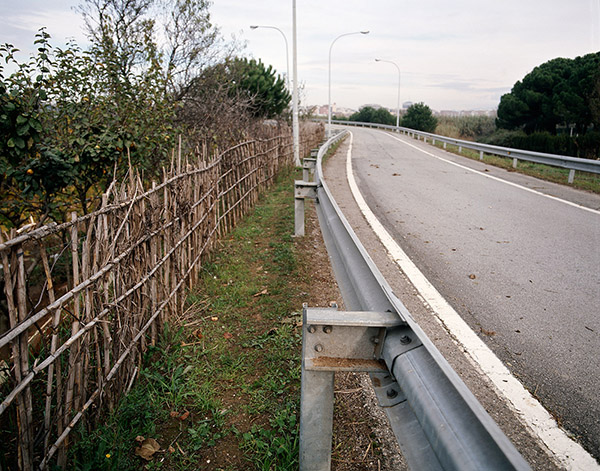 As the years go by I am endlessly amazed and filled with wonder at our capacity as human beings to create places in the most unlikely spaces imaginable. To create a place means to inject soul into a portion of geographic space which previously had none: to fill an anonymous, amorphous corner of our world with meanings, emotions and memory. This huge, dense fabric of places that we human beings are able to generate is what transforms geographic space into existential – or rather geoexistential – space. Places are not just locations. They are, above all, experiential nodes that connect us to a piece of territory in a profound way. They are bastions, refuges, enclosures, pieces of land that we interiorise and appropriate in many ways and for many reasons.

These places, which we fill with meanings and emotions, do not necessarily have to possess any specific formal quality or a socially accepted aesthetic value. They may do so, as in the case of easily recognisable places that identify us as a community, that end up becoming landmarks and symbols for society as a whole. Nonetheless, as we go about absorbed in our daily lives, we also create places in banal, simple, even marginal spaces that often go unnoticed by our fellow citizens. They are important to us, but insubstantial to others.

The peripheral, periurban market gardens that take advantage of the scattered, empty, interstitial spaces generated by contemporary processes of metropolisation and urban sprawl are an excellent laboratory for understanding how place can be created out of nothing; and how it is possible to inject memory into a spatial repository that didn’t yet have any. Although these places probably did have memory in the past, but it was destroyed, dismembered and pulverised by the massive infrastructures that are oblivious to the past. But in spite of everything, memory returns – reconfigured and reconstructed –, reinstated by new actors. This process is boosted by ephemeral objects that enjoy a second, third or fourth lease on life, and which the new market gardeners reappropriate and use. Old, worn out tools that would usually end up in the bin or, at best, in a recycling container provided by some municipal environmental department. What fortune, those objects that are saved and help shape the identity a few anodyne square metres! How many lives have they had? Who used them in the past? Where did they come from? We will never know.

These environments have a strong ephemeral feel that reinforces the sense of a camp or a temporary, makeshift facility. It is a kind of “sedentary nomadism” – contradiction intended. Somebody takes care of a remnant of space that becomes a place, even if it is for an indefinite period of time. Sometimes – or rather, often – the surrounding infrastructures are extended, driving these nomads a few hundred meters further out. But the settlements are quickly rebuilt. Occupants of leftover territories, spatial remnants and geographical wastelands, like the tattered shrubs and weeds that, by the work and grace of nature, put down roots alongside motorways and highways to the indifference of drivers.

Marginal, peripheral, spontaneous, ephemeral market gardens occupy territories that are hybrid, mixed, adjacent, in the cracks between the built and the unbuilt, the useful and the unusable, the planned and the unimagined… and ambiguous. They settle on boundaries, on faults, on the critical points of convergence of often incompatible uses and visions. They put down roots in the margins, the perimeters, frontier lands made up of membranes of variable geometry.

Although they are ever-present as we travel and circulate through these peripheries, they are, in reality, largely unexplored, unknown landscapes. We classify them as no mans lands, as territories without purpose or personality, even though this ultimately has nothing to do with their real existence. Their seemingly untidy appearance can look rundown to some, and can transmit a certain sense of slovenliness and neglect from a distance. But up close, things change, and a true microcosm comes to light – a functional, rational subdivision of the environment. But above all, what emerges is a recovered sense of the place. Joan Nogué

Professor of Human Geography, University of Girona Director of the Landscape Observatory of Catalonia (www.catpaisatge.net)

Ignasi López is a photographer, designer and co-editor of Bside Books. He uses photography as a medium to explore the areas on the outskirts of cities and the human need to transform them. In 2003, the Centre National des Arts Plastiques de Paris (CNAP) commissioned him to create a contemporary postcard imaginary of the city of Toulouse. In 2005 he exhibited “Sport Places” at PHotoEspaña, and he was shortlisted for the festival’s Discoveries award in 1999 and 2000.

In 2007 he began to work with Carlos Albalá; together, they founded Bside Books and went on to work on various photography and research projects. They were the recipients of a BCN Producció grant in 2008 and a CoNCA grant in 2010 and they have participated in several exhibitions in Spain and internationally, including the 2010 Fotografia Festival in Rome, Salon Light (Paris), and the 2010 and 2011 Emergent-Lleida Festival (Museum of Lleida).