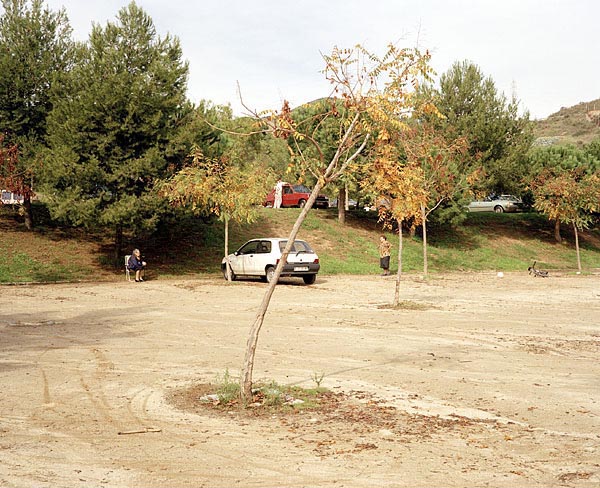 It seems we live in a leisure society. However, the leisure here is not that of idleness, but of activity -the so-called “active leisure”, which according to the sector’s industries, forms the ideal complement to work. Thus, those who have spent all day at the office are recommended to take up paintball, bungee jumping or rafting; while the scaffolder can haul himself off to Port Aventura to see the world. For simply to do nothing, besides being downright uneconomic, is looked at askance; and rest gets turned, as if by magic, into a business. Consequently, we get the production of areas for organized leisure which resemble the areas organized for production. The work ethic and aesthetic are applied to leisure time in such a way that it is now feasible to mix up the benefits and anxieties of one with the other. With this set-up, it is hard to see how leisure can be maintained as a therapy for work. 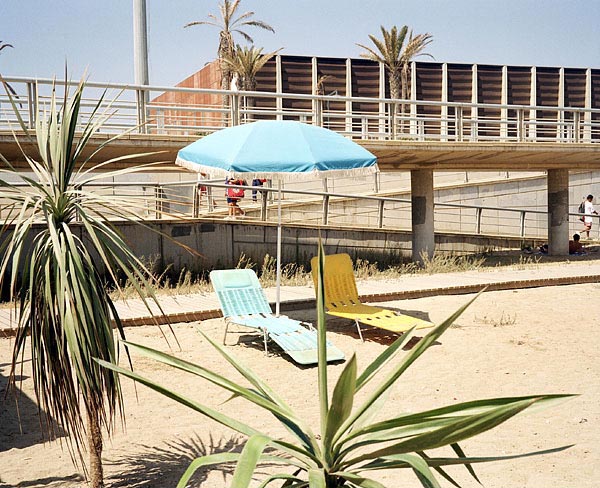 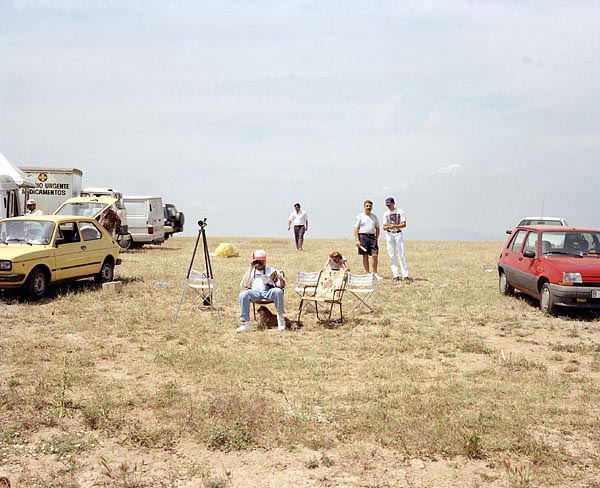 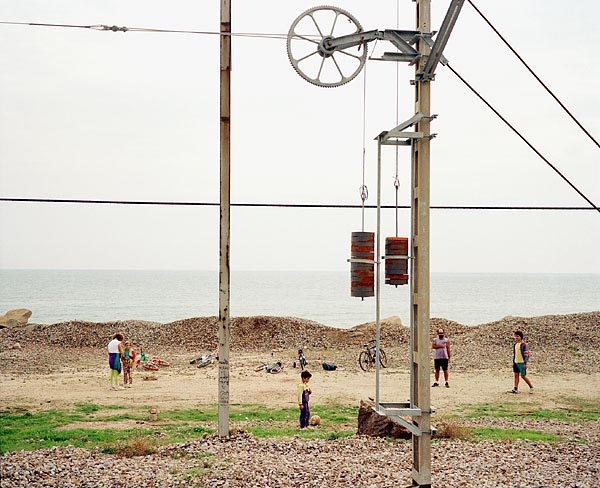 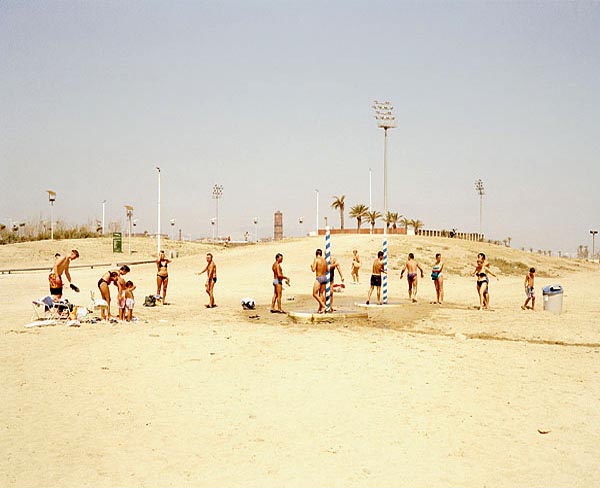 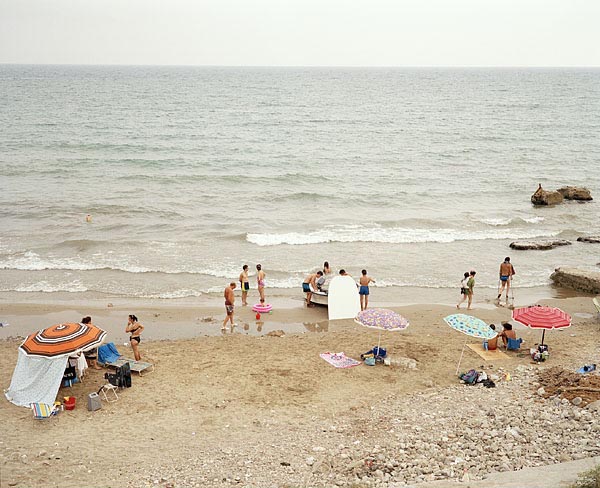 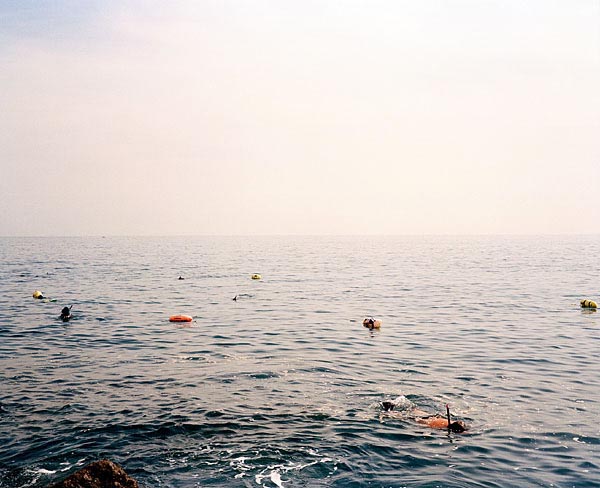 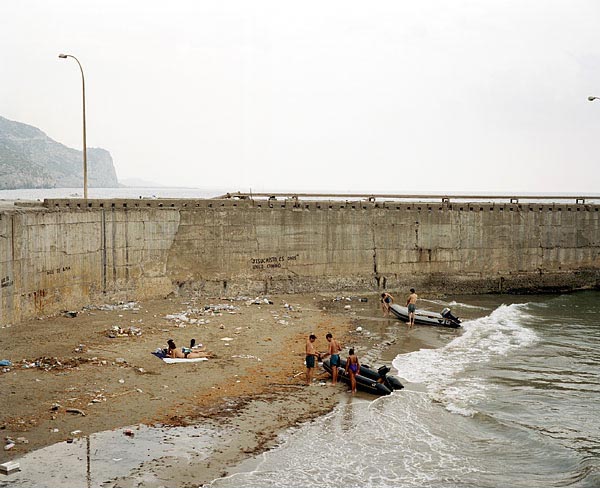 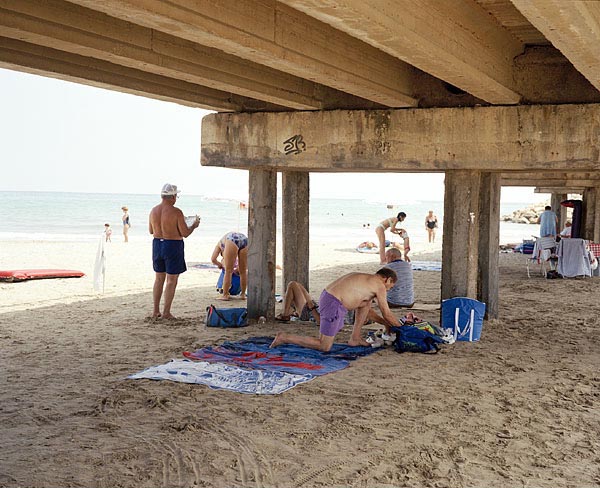 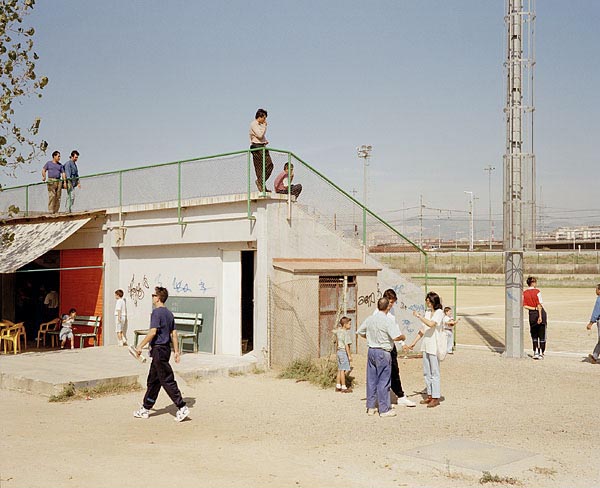 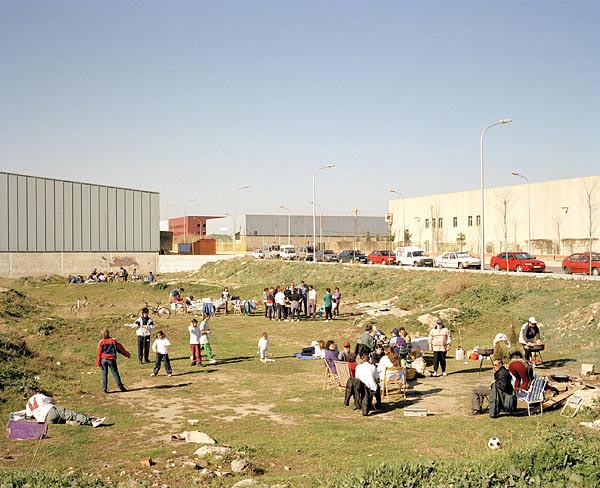 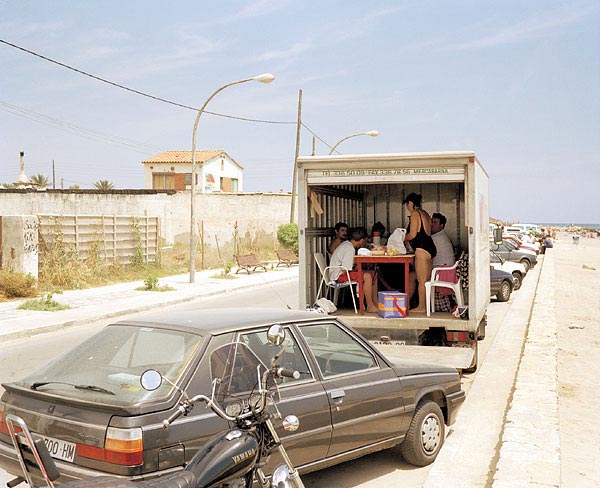 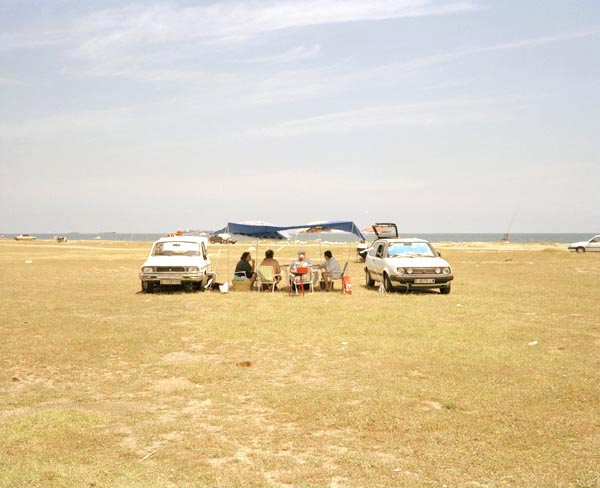 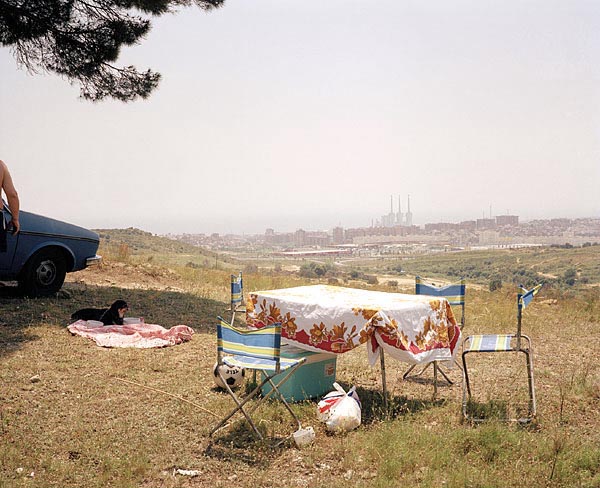 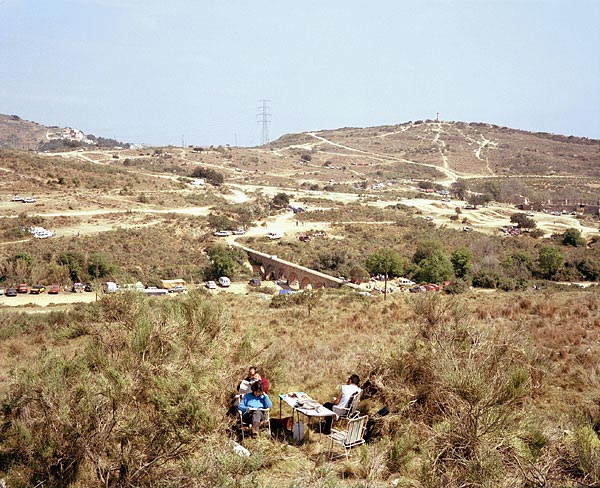 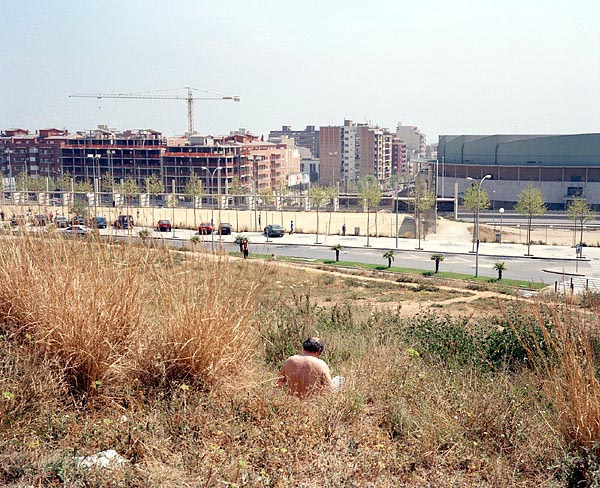 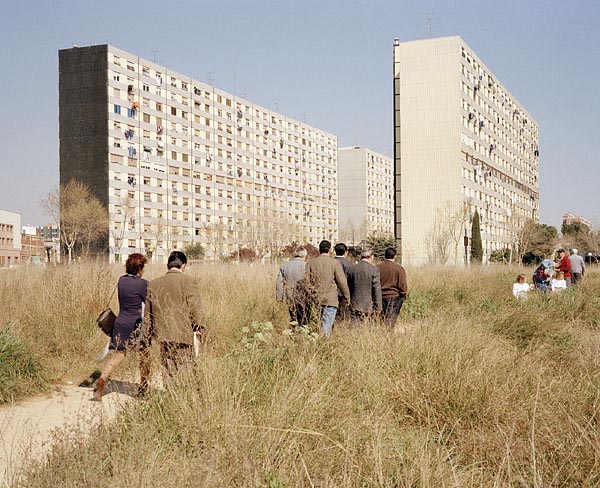 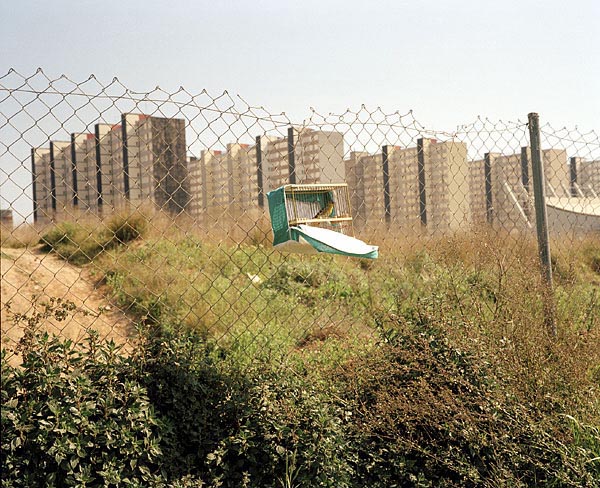 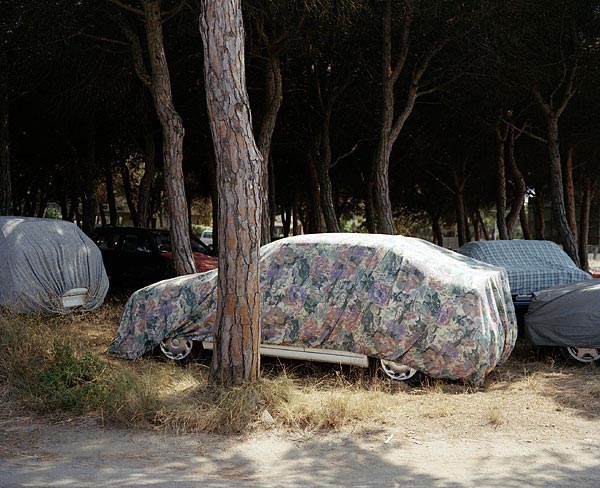 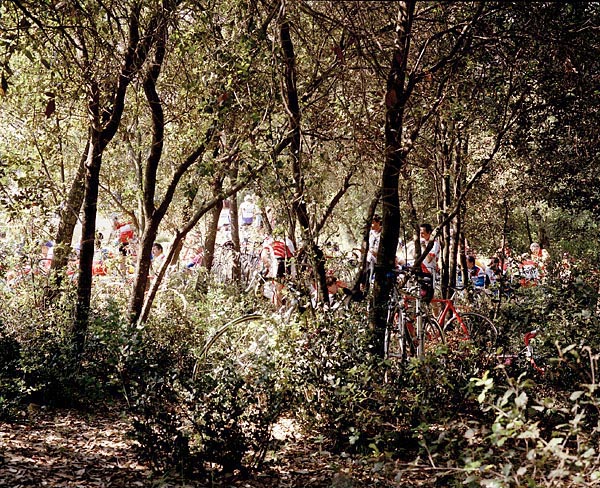 If you take a stroll one sunny Sunday morning through the peripheries of Barcelona you’ll come across a strange landscape. Between the motorways and housing blocks, the industrial states, the commercial centres and sports complexes; between the nature parks and the theme parks, at the edge of all this contemporary urbanization, you will find the marginal areas where folk flock together every week to spend their free time. The question is: Why do people turn these residual spaces into the centre of their leisure activity?

At the end of the Sixties, Line Four of the Barcelona Metro was constructed, linking the Poblenou district to the city centre. From then on, the journey could be made without having to contemplate either the ruined scenery of abandoned factories in Nova Icaria (the present Olympic Village) or the dusty warehouses of the transportation companies. The general feeling in the neighbourhood was that it wouldn’t be necessary any longer to go up to Barcelona, seeing that one was now part of it. I don’t remember this meaning much to me, but when the annual San Juan street party came round, the bonfire which we had always built at the crossroads of Pujadas street with Lope de Vega was prohibited by the police, from that year on. Thus, with the Metro’s arrival, and consequently the arrival of the city itself, there also came the restrictions, some of them with a certain logic: the paved and dirt streets had been asphalted and, as is well-known, asphalt is melted by fire. The following year we had our bonfire away from the asphalt and the city, towards the La Mina district, at a place we called “El Rancho Grande” which was, despite its name, nothing more than a vacant lot full of old junk and weeds. To be sure, it wasn’t a very attractive setting -however it did allow us to bring off an event which in the former place had become impossible.

Lewis Baltz said that the most untamed pockets of wilderness in the Western world were to be found at the peripheries of big cities (while in fact the idea of a nature park implies a certain intervention and a long list of prohibitions). According to Baltz these marginal spaces found at the city’s edge are where we can best experience the absence of order and the social laws which keep us in check. And Watteau calls up similar feelings in his famous painting Embarkation for Cytherea. In it the painter offers us his Classical version of the return to Nature, with caryatids and cherubims, in a setting which abounds in vegetation and studied gesture. It’s a scene full of noise and acrobatics, which shows the transformation undergone by man and woman when they get back their lost paradise of love and celebration. The marginal land of the urban peripheries, like Watteau’s Isle of Cytherea, is a superfluous place within the limits of the strictly necessary, where one can get into such anodyne activities as having a walk, reading or picnicking, simply for the pleasure of the distraction without intermediaries.

It could be argued that occupying these places is a response to a desperate situation. Or as Albert Camus puts it in The First Man, the poor person’s lot is to live eternally surrounded by common names (and places). However, when I’ve visited such cathedrals of organized leisure as Isla Fantasia, Port Aventura or Montigalà, I’ve found more tranquillity in the adjacent patches of wasteland converted into improvised sunday dining rooms, than in the park interior itself. It strikes me that behind this improvisation there lies more design than accident. It is possible, then, that the interest in these spaces is due more to people coming to see the periphery as a place of freedom. Or put another way, that freedom can only arise in a residual space, and therefore presents us with an image of desolation. (text by Xavier Ribas, 1998)